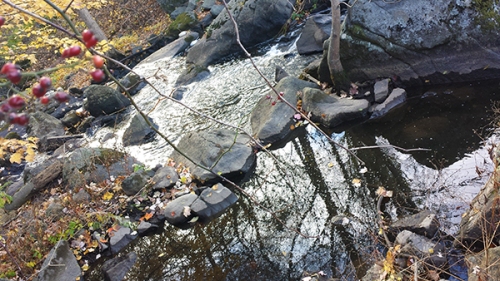 An odd trio they made, a cat, a bowl
of soup, a beach towel, thought Moon Runner.
Maybe that was the norm on this atoll.
This scrap of rocky beach was no stunner.
All volcanic glass that cut at his feet,
White-caps slamming aground with enough force
to shatter a boat if he’d had one to beat.
Made him wonder why he’d chosen this course.
The cat nudged the bowl of soup with its head.
Not a golden drop spilled on the towel.
An intelligent gleam from its eyes led
him to join the cat on the soft towel.
He lifted the proffered bowl, sipped the soup.
‘Round the island appeared a golden hoop.

‘Round the island appeared a golden hoop.
Waves dashed off it, pounding the sea outside
its circumference but calmed within the loop.
The towel streaked skywards giving them a ride,
the cat, Moon Runner and the empty bowl.
The cat licked its paws unconcerned by flight.
The towel rode the wind leaving the atoll
behind; it headed towards a land of blight,
a scar on the one continent’s countenance,
a burial place and prison for fell
beasts mages created in arrogance
during the Crystal Wars. No spell can quell,
no sacred rite forever them constrain.
Now the ancient seals on their prison strains.

Now the ancient seals on their prison strains.
The cat’s slit-pupiled eyes catch his and hold,
an image passes mind to mind  of strain,
golden, light-woven chains of spells that hold
back a writhing mass of tooth, claw and scales.
Magic-eaters, traykas*, those vile creatures
who once preceded armies. Quick as gales
they killed Magic Kind, humankind, creatures
too ’till Guardians drove them back and sealed
them in this tomb that they’re tearing apart.
The cat blinks; the image recedes leaving
Moon Runner stunned, quiet but believing.

“What must I do to avert disaster?”
He asked the cat, knowing now that no cat
was it, an avatar of a greater
Lord, who sat composed and shaped like a cat.
The cat spoke not while he worked the problem.
But one piece of the puzzle still niggled.
time alone could not weaken this emblem
of high magic. None now alive tangled
with that much power anymore, mages,
wizards, witches, soothsayers, warlocks–
the few left hid or risked people’s rages.
The cat swiped a paw to dispel such talk.
The center can’t hold, the balance falters,
said the not-cat, unless something alters…

*Traykas is actually spelled “treakas” in the Curse Breaker Saga. In the poem I stuck to the phonetic spelling but a certain bard, who shall remain nameless, requires that for correctness sake, I include this clarification.  Treakas make an appearance in book 2 or 3. I write that part already but as I’ve said before, I write my series out of order. That’s all I’m going to say. Moon Runner might also make an appearance. That’s all the spoilers I’m going to give today. Sorry.

In response to The Daily Post’s writing prompt: “An Odd Trio.”