Grandma Hitches a Ride with Santa

‘Twas the night before Christmas when she stirred,
a blind woman from her treetop abode.
Through the wooded vale she trudged, her thoughts whirred,
circled about regret ’cause she’s not bold.
No time left now that death’s velvet hand touches
hers, its cold presence walks beside, offers
no aid when her rag-wrapped foot, the root clutches.
Leaning on her staff, her magic buffers,
keeps her from harm, with its small witchery.
Rising, she feels about, finds the path and the way,
to a grandson she’s spied through trickery.
Her magic, much faded, still points the way.
Bright of eye, fair of face, bearing no trace
of his grandmother who’s running the race.

Crunch of snow, slide of rails, what’s this beside?
Jingle of harness, clop of hooves, ho ho,
what means of conveyance slides now beside?
“Earth sister, your path and mine converge, no
need to walk alone when my sleigh goes hence,”
said a man too jolly to be death’s coach
man and yet who else would be passing hence
on such an eve, when Christmas approaches?
No flap of angel’s wing, bell’s tinkle to announce
a heavenly host’s descent to raise her
to a reward she didn’t deserve nor denounce
her to the devil where such a selfish cur
such as her belongs, there to burn in fires
guilt and regret stoked, evermore her pyre.

“No, earth sister, no fire for you this night,
just a sleigh ride, a blanket to ward cold
off your tired bones, while we travel through the night.
Take my hand, alight, leave behind the cold.”
His offer seemed true; she’d so far to go.
She groped for his hand, caught it, climbed aboard.
Once settled ‘neth blankets, she had to know.
Through seeing stone she saw no demon horde,
just a man with a white tumble of beard,
wearing a red suit that his kettle drum
belly stretched, twinkling eyes–not what she’d feared.
Drawn by eight reindeer, hooves pounding like drums,
as they threaded ‘tween trees, picking up speed,
shooting skyward, through the air they careened.

“Do stay in the sleigh, dear, can’t have grandma
run o’er by a reindeer, not this eve.”
“Mmmm what you say? You give rides to grandmas?”
startled, Leesha shoved her stone up her sleeve.
Best not to allow the uninformed to see.
“No, I was just making conversation.
There was a song awhile back you see.”
She didn’t see but then, recrimination
had pulled the stone back to her hand, better
to see what she could ‘fore death’s grip tightened.
Bright of eye, his magic’s now unfettered.
Much more than she e’er possessed which dampened
his prospects quite a bit, perhaps she’d done
right to let streets and strangers raise that one.

“Got a good head on his shoulders, your grand-
son, done rather well for himself despite…”
Hmm, yes, despite, she had not lent a hand.
She’d let streets and strangers rear him despite
her wish to hold him, yes, she’d imagined
that but she’d done nothing to make it so.
“Thought he’d die young like his mum,” live enshrined
in her heart, but the fever’d passed, e’en so,
she’d delayed, seven years had passed, magic
had spiked, the fever’d returned, but again
he’d pulled through and she’d stayed away, tragic
was his fate, magic kills, she knew, again
came that fever, two month’s past, now,
at twenty-one, but it’d passed; he lived now. 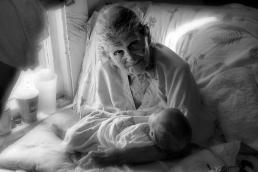 She, dying fast, set forth at last to meet
a grandson she’d watched grow through seeing stones.
She’d watched him, at sixteen, crumple when met
by a babe that shared his fate, and through that stone,
saw him vow not to let strangers or streets
raise his son and how he struggled, so young,
so gifted with magic, its doom, he’d meet.
She knew because its doom before her hung.
Perhaps it’d hold off ’till she’d held her great-
grandson in the flesh instead of in dreams.
For she’d imaged that often of late
in the four years since his birth that it seemed
she’d felt his weight against her arms, his head
resting o’er her heart and, ‘love you,’ she’d said.

The sleigh stopped and her reverie ended.
“This my stop?” she clutched the blanket, too soon
to arrive, too late for all t’be mended.
“A quick stop, good gifts to bestow,” he crooned.
Adding a ho ho, he took his boon
and alighted, climbing through a window.
Night winnowed down to the hour of her birth.
“Some gifts can’t be encompassed by a bow,
shut in a box or glitter wrapped in mirth,”
said the red-suited man taking her hand.
“Your hours are few, good sister, time we go.
One last gift you have to give and by hand.”
The sleigh clattered o’er the roof to the sky,
and it dashed towards a star that it had spied.

The story continues in Santa’s Mission.

Read the rest of the Christmas Sequence here.

Also inspired by:  Poetry 101 Rehab: Wrapped. It’s also a glimpse into the future for the Daily Post’s prompt “Ebb and Flow.” This is a fearless fantasy.

16 thoughts on “Grandma Hitches a Ride with Santa”