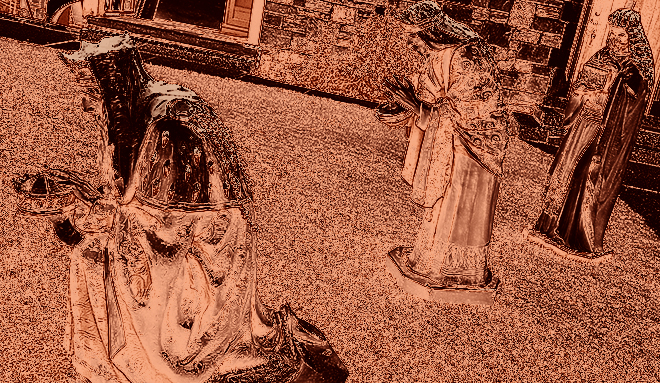 (Picks up where Magicians and Magi left off)

Sarn woke to a strange sight; camels processed
under a sky dominated by light
from a huge star that westward proceeded.
The caravan followed its royal light.
“The star guides us,” Ran said from his place camel-
back, perched on a pile of gifts, carefully wrapped.
“Who’re they?” Sarn asked as dunes passed untrammeled
by moor or mount, field or fountain; untapped,
its power pooled; he felt it even mounted;
that was a wonder ’cause no beast would bear
him ‘cept this camel; Ran jumped onto Sarn’s mount.
Caught by magic and arms, he lands safe there.
“They’re magi–wise men,” Ran shrugged, “they fixed you.”
Sarn didn’t recall that. “And looked after you?”

Ran nodded, glad that time broke the fever.
“Born a King on this plane,  gold I bring, crown
Him again; King fore’er, ceasing never,
O’er us all to reign,” sang a Magi down
the line and the others joined the refrain.
“Star of wonder, star of night, with royal
beauty bright, Westward leading, entertain
no thoughts of veering, lead us, be loyal!”
One of the magi rode beside, “you’re better.”
“Thank you for your care, who’s this king you sing?”
The Magi smiled. “You’ll see soon. That way’s better.”
Sarn sighed, recognizing a ‘need to know
and you don’t’ comment from one in the know.

“Number two,” Jerlo raised his steaming mug
in a mock salute. “Well, what did I miss?”
Nolo gripped the chair back and faced his smug
boss, knowing his next few words would knock his
boss into action but he had to speak.
“Sarn’s missing. He vanished on Christmas eve.”
Jerlo spat coffee, slammed his mug and shrieked
as coffee sloshed, burnt his hand, wet his sleeve.
“I’ve had the Rangers combing the forest.”
Nolo shook his head, “searchers found no sign.”
“Damn stupid Kids and enchanted forests!”
Jerlo patted his frizz halo, a sign
of his mounting frustration aimed at Sarn.
“I’m not telling the mount’s Lord we lost Sarn.”

Find him–find a Kid up to his eyeballs
in magic–yeah right with what miracle?
Nolo left the commander’s office galled
at the Kid’s nerve; his latest debacle
might cost Nolo his job or worse, all cause
one stupid Kid hared off without notice.
Indentured, the Kid had no rights by law.
He would have to carry out whip’s justice
e’en though he didn’t want the Kid to be hurt.
Mem’ry tortured him with a scene six years
past, when a broken Sarn lay bloody, inert,
at the hands of a psychopath;  though years
had passed, Sarn’d mended in body, not soul;
his soul was healing with help, but not whole.

Guilt’s aftertaste, a cross ‘tween turmeric,
tobacco and silt, pulled e’ry muscle
rigid, made his heart palpitate, too quick
that flash of face, yet relive the tussle
he did, feeling death’s entropic hand stop
a heart’s pulsations,  snap a life’s filament,
all so that skinflint of a wight would drop
Sarn, that stupid Kid, lift the enchantment
that kept him tranced out of his damaged mind,
and adhere to the Longest Night‘s vile need
for innocent blood–a price paid in kind
by a man who lost way and life for greed.
Guilt admonished Nolo but he adhered
to his choice, which he’d make again, he feared.

The story continues in Stars and Angels Sing

Inspired by the Epiphany (Little Christmas) and Mindlovemisery’s Menagerie’s Wordle #91 and Poetry Rehab 101 – Odyssey. This is my Now.