He’s got wings and a swift-flying mate, but they’re fighting dangerous magic with nothing but their wits and claws. If they fail, they’ll lose more than their only human friend. Adventure with Thing and Amal as they risk it all.

Get all three of their stories now:

In “Spell of Wings & Glass,” part of the Hidden Magic Anthology, Magic might be illegal, but in the maze under Mount Eredren anything could be hiding. So, one warlock on the run turned prison Guard is no big deal, until a baby Owl-Cat shows up. Even cuddly monsters deserve a safe haven, and this prison isn’t it.

But Nulthir is in for the fight of his life to get that fluffy baby—something—to safety when it attracts trouble. Someone’s lurking in the shadows of the prison, and that person just might be hunting the very creature he’s trying to save. Or it might be hunting him. Magic is illegal, after all, and spellcasting has deadly consequences for them both. But it’ll take more than magic to survive what’s coming their way.

Get “Spell of Wings & Glass” in the Hidden Magic Anthology now!

In “Spell of Bone & Ash,” part of the Wayward Magic Anthology, Nulthir thought he’d escaped the darkness that nearly destroyed his family, but he was wrong. That evil is now inside him, straining to break free. It’s up to Thing, Amal, and their family of mind-talking creatures to stop the transformation set in motion by a magical attack before it changes their only human ally into an inhuman monster.

Get “Spell of Bone & Ash” in the Wayward Magic Anthology now!

In “Spell of Scales & Steel,” part of the Forgotten Magic Anthology, Thing thought he had it all figured out when he and his son followed the thief to his lair. But his plan goes to hell in a hurry when the thief runs straight to a young mage. Is that boy the mastermind of the attack on the prison that started this whole mess, or is he just another pawn in what has become a terrifying game of spells?

Get “Spell of Scales & Steel” in the Forgotten Magic Anthology now!

There will be a fourth episode because the gang wouldn’t let me end this in the third one. They went way off script in “Spell of Scales & Steel.” But they did so many cool things, I couldn’t cut them out. So, they’ll be doing the epic showdown in the fourth episode instead of in the third episode as I had planned.

Please direct all complaints to Shade, Furball, and the Queen of All Trees. They hijacked the plot.

Thing and Nulthir, together and separately, have stared in several other books. For a full listing as well as details about future books featuring them, visit melindakucsera.com/hanging-out-with-friends/

They kidnapped her baby and vanished without a trace, leaving Robin no other choice. She must ask the Rangers of Mount Eredren to aid her in her quest to save her baby. But first, she must convince them of the truth—the scourge of the enchanted forest is now kidnapping young children. That task might prove deadly if she’s not careful. Enemies are everywhere under the mountain, and they’re targeting her.

For Robin, failure is not an option. She’ll do anything to save her daughter even call forth a magic she doesn’t understand.

Rogue Night is the second book in the female-led epic fantasy adventure series, Robin of Larkspur, starring a young woman warrior who could become the most skilled witch their world has ever known. Christian Fantasy meets epic fantasy in this fast-paced narrative pitting Robin against shapeshifters, pagan deities, demons and other supernatural creatures who will do everything in their power to stop her from fulfilling her destiny.

They kidnapped her baby and vanished without a trace. With no clues to follow and an injured companion to save, Robin must undertake a difficult journey to get help. But a wintry wonderland fraught with dangers lies between her and the one person who could find her daughter. For Robin, failure is not an option. She’ll do anything to save her baby even become the one hunted in a deadly game.

Hunter’s Night is the first book in the Robin of Larkspur series. Christian Fantasy meets epic fantasy in this fast-paced narrative pitting Robin against supernatural creatures who will do everything in their power to stop her.

If you’re looking for:

√ badass heroines (and villains) with brains, blades, and humor
√ a fantasy adventure with side-switching, double-crossing and magical mayhem

Then, get Relic Hunter now on Amazon, iBooks, Kobo & Nook.

Theirs was a friendship for the ages–an abused mage just trying to raise his younger brother and a gray-clad enigma who hides beneath a cloak and veil.

They didn’t know it but the day Sarn and Shade met, they took the first step toward a perilous friendship that would end in the deaths of many, unleash a demon, and earn the ire of an angel.

From the mines under Mount Eredren to the Gray Between life and death, follow the twisted paths friendship takes. Only one will survive when adoration turns to obsession. But not even death can sever some bonds.

Find out what happens in Curse Breaker’s Shadow, episode one is on sale now as part of First Love.

Attend the Release Party | Get your copy 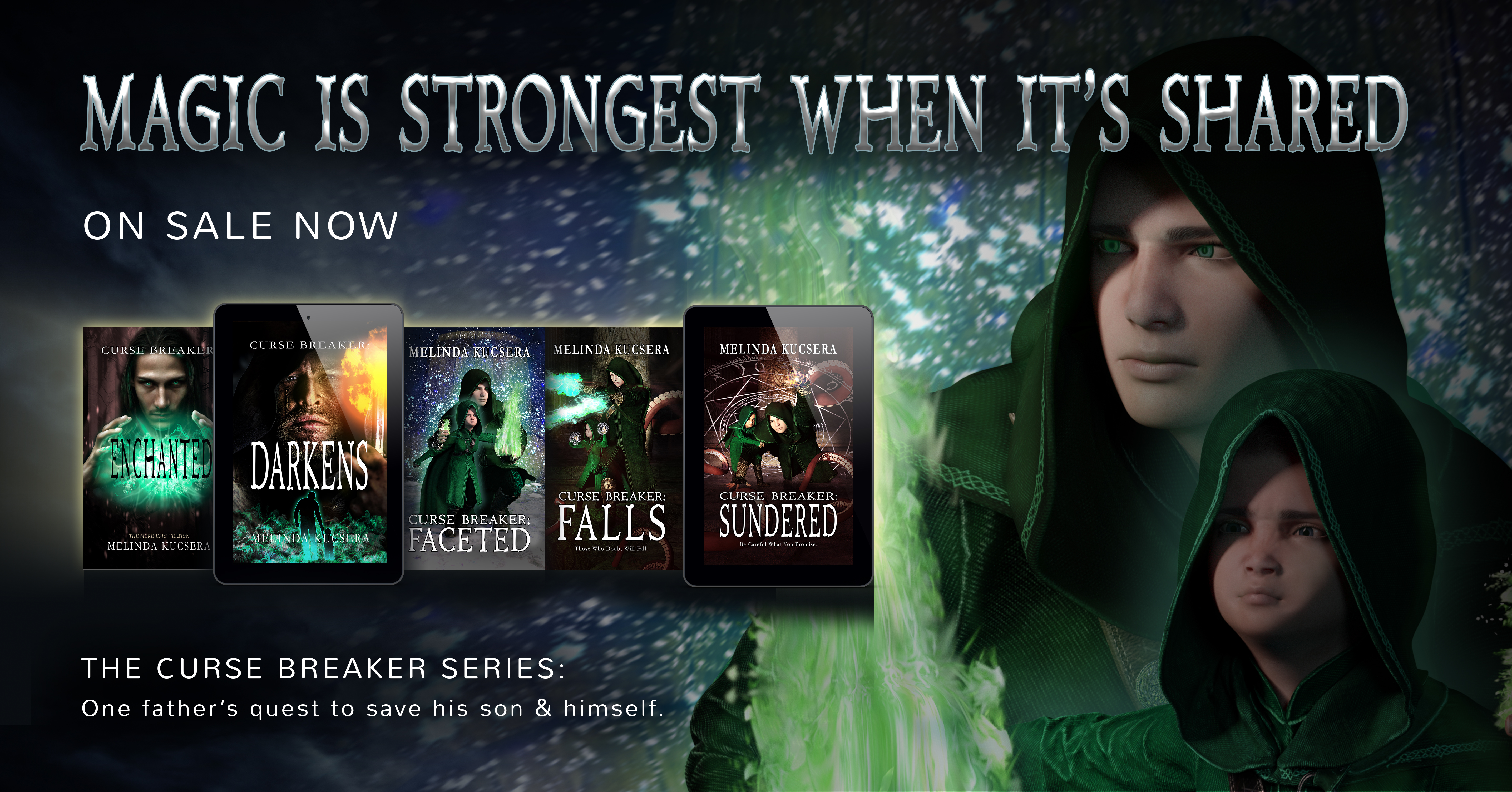 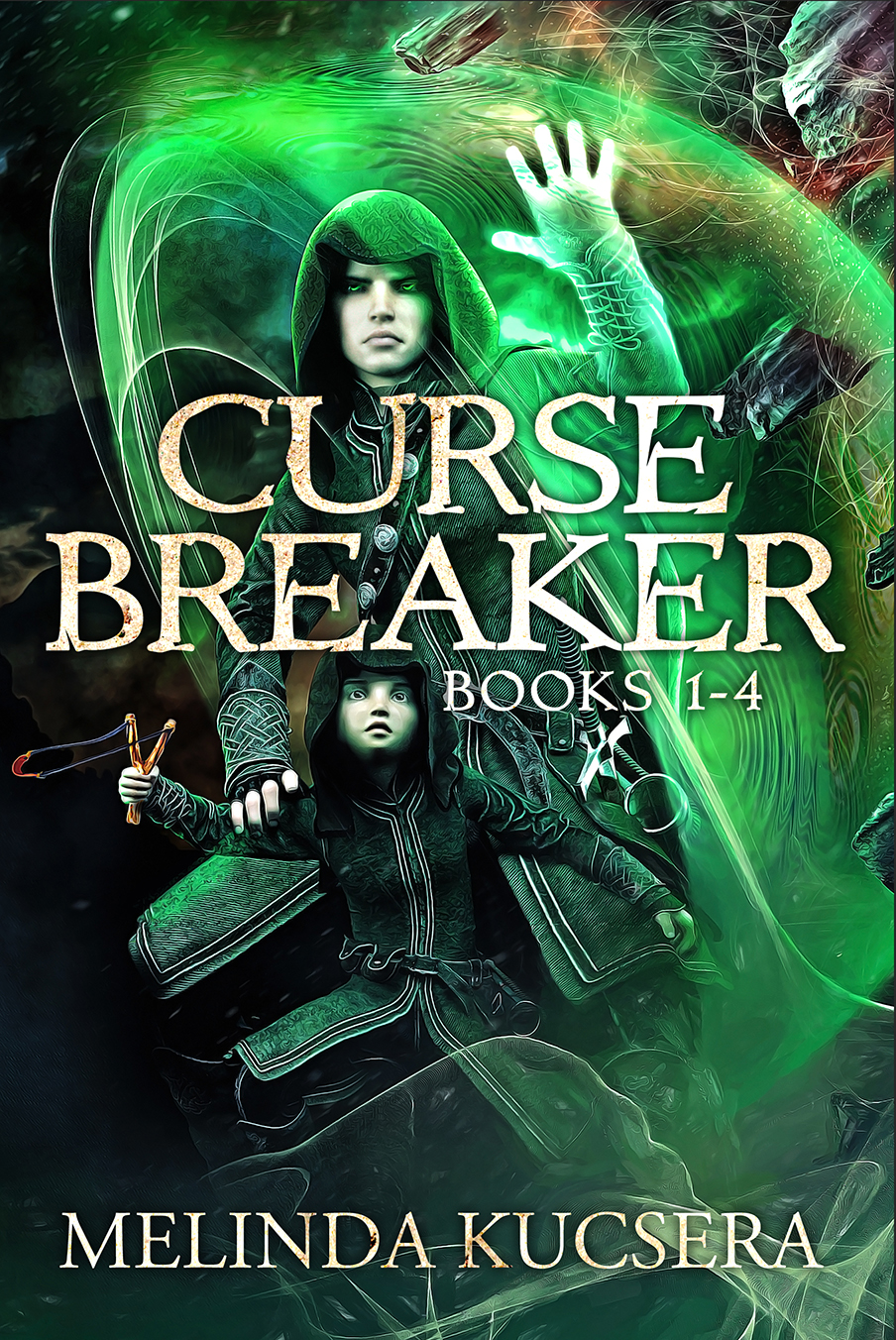 Magic is illegal.
But enchanted trees walk, ghosts beg for help and demons plot.
Neither is prepared when their plans collide and ensnare an untrained mage and his young son.
Sarn will do anything to protect his son—even if that means taking on the enchanted forest, ghosts, monsters and a power he cannot fully control.
But he must hurry. Time’s running out and his master’s calling.

Get your copy now!