…from the case files of Detective Pagasmo…

(Continues from No Truth in Quotes)

I had the college kid cornered, and even his drug-addled mind recognized it hence all the cowering. Though I could do with less silence. All attempts to get the mute kid talking had failed. So I picked up his battered copy of Maurice and paged through it seeking answers. Lots of passages had been underlined, starred and circled. But none of them correlated to my predicament nor did they mention the symbology which kept cropping up everywhere I went.

Had I landed in the middle of a conspiracy? There were folks I could hit up in academia, but I didn’t want to drag anyone else into the crosshairs of this organization. Not after they had blown up my apartment complex.

A chirping sound interrupted my thoughts as Baldy fumbled a cell phone out of his pocket. Dropping it like a red-hot coal, he backed away from the counter and pointed at his cell. “It’s for you. You’d better answer.”

I knew what I’d see when I glanced at the screen, and I wasn’t disappointed. There was another version of this ‘IMBC’ icon: 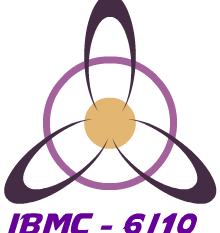 This time, it had been photoshopped over a sky painted pink by a sunset:

I studied the silhouette as I accepted the call. Heavy breathing filled the air and then faded to static a moment later. I cut the call just as a text message winged its way to this phone. The message was a poem called ‘Telephone’, and it read:

“In,
search of skin,
color no matter,
brighter or darker,
tell no one,
I will take someone,
Ssssshhhhh!
–  ghost, me!”

Lovely, so my mysterious stalker had a penchant for poetry. I reread the lines but got nothing from it but confusion. It didn’t relate to the other messages nor did it build on them either. I was back at square one and still as clueless as ever.

A bottle shattered. Two more met the same fate as a gunman opened fire. The college kid took a triple tap to the chest before sliding down the shelved bottles in a bloody smear. I hit the ground rolling and came up on the balls of my feet in the next room. Monitors shattered as bullets punched through the mirrored wall separating the lobby from the web surfers.

Crawling under cafeteria style tables, I kept moving despite the sparks and glass raining down on either side of me. This place had a back door into an alley which should be abandoned at this time of night. If I could just get out there, Gaia could open up an escape route for me.

For the Incredible Blogger Marathon Challenge #06, join me in it. It’s 10 challenges, and you can do them whenever.