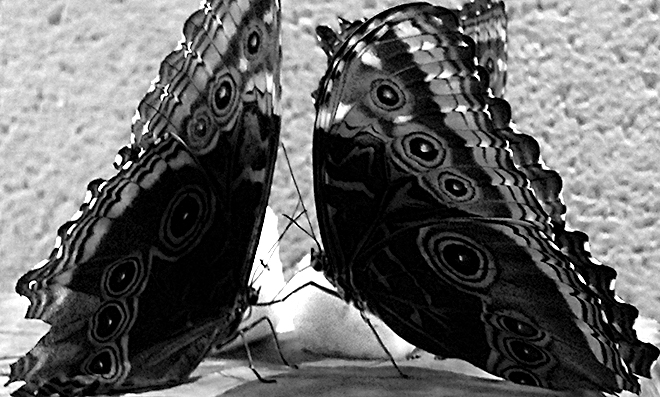 They were kung fu fighting, those butterflies,
and grappling for a hold. Their wings’re upraised
out of the way; their eyes are on the prize.
Through first one round and then two, they grazed
each other, neither gave ground, so on they fought
into the twilight. Lightning bugs zipped by
to light the ring while crickets and ants sought
the best odds on who’d win by a flyby.
They are kung fu fighting, still in the ring
and grappling. Neither butterfly has won
yet but their bout goes on ’till the birds sing
and begin to gad about, then all but one
butterfly left to tend the flowers and
that bold butterfly now clings to my hand.

I nabbed the pic above ninja-quick with no flash on my smartphone. They broke apart the instant my camera app captured their little drama.

<– Here’s another pic to give you an idea of the scale. These were not your average butterflies. They were quite large, very delicate and bold enough, in their own badass way,  to hitch a ride on my pant leg.

Worry not, I was very careful.

In response to The Daily Post’s weekly photo challenge: “Careful.”