Thank you for buying Rogue Spells! We hope you enjoy it as much as we enjoyed starring in it. Speaking of books, His Angelic Keeper Hidden was supposed to be 99 cents last week, but something happened, and the sale did not go through until Thursday. So it’s still 99 cents this week for everyone along with books 1, 3 and 4.

In books news, Melinda, our faithful scribe, is finishing up the first draft of His Angelic Keeper Tempted. So we’re trying to cram in as much mayhem as we can before that happens. The first three chapters are posted here for your enjoyment. 🙂 Then we’ll move on to Curse Breaker Trapped for National Novel Writing Month, also known as NanoWriMo, or November.

And now back to our special presentation of:

As Bear stepped through that portal, he landed on a giant book surrounded by strange vehicles. Some were damaged, but others weren’t. There was also a giant hole in the wall of a brick building. That can’t be good. Clearly, I missed something important. I better find Ran and find out what happened here.

A metallic object gleamed in the light falling through that hole in the wall. But his body shrank and grew rounder and less anatomically correct before he could get a good look at it. His paws rounded, and he lost all dexterity while his head and belly swelled until they were disproportionately large.

Bear teetered on his furry ball-like feet until he flopped onto his bottom. Underneath him, the book shook, and a familiar snout poked out of the pages.

“You forgot something,” the Newsletter-Dragon said. She looked as strange as an ink drawing. Instead of lines, she was made of tiny blue ones and zeroes. It gave her a stippled look that was rather fetching and less blinding than her usual glow.

“Why are you inside a giant book?” Bear narrowed his button eyes.

“What were you doing inside one?” The Newsletter-Dragon gave him a knowing wink.

“I don’t know what mischief you’re up to, but I’m trying to find Ran.” Bear eyed the dragon. Was she up to her old tricks again?

“I’m not up to anything,” the dragon snarled. “Go find your little human.”

“Sure you aren’t. You exist to cause trouble.” Bear rocked on his bottom and tipped over onto his side and cursed. He pushed up to all fours, but that was as far as he got because he now carried all his weight in his belly and head. Who designed this bear? If I ever get my hands on that person, I might hurt them for making this a lot harder than it needs to be. How the hell do other stuffed bears get around?

“I do not. I exist to ensure the security of Melinda’s subscriber list.” The Newsletter-Dragon glowed with indignation.

“And who’s doing that while you’re here causing trouble?” Bear tried to stand, but his head was too big and heavy for his stuffed body, which had no damned bones to support his weight. How will I find Ran when I can barely move?

There wasn’t enough magic in the air to reshape his body to resemble an actual bear either, or he would have done so already. Oh well, that couldn’t be helped. He’d just have to manage as best as he could in this top-heavy body.

“They’re quite safe. I defeated the hackers who were trying to access my subscribers’ personal information, and I was going to help you. But now, I don’t think I will.” The Newsletter-Dragon retracted her head and disappeared into the book. Her swift exit rustled the pages.

“Wait a minute, you were planning to help me? Why would you do that?” Bear leaned over the edge and pushed his paws in between the pages. “Hey, come back here. I’m still talking to you.” Bear still couldn’t believe that dragon had even considered helping him. But he could use some help. “How did you get in that book anyway?”

“Well, I’m done talking to you, and you know what else I’m done with?” The pages shivered as the dragon’s muffled voice issued from between them.

“I’ll regret asking this, but what else are you done with?” Bear tried not to roll his button eyes heavenwards, then gave into the impulse. It’s not like that pouting dragon could see him roll his eyes and disgust from inside a book.

“I’m done being a pawn in someone else’s game,” was her shocking reply, and it made Bear’s fur stand up.

“Who’s pawn? What game? Tell me.” Bear felt around for that dragon.

“No, you’ll have to ask someone else because I’m done.”

“Then why are you still talking to me?” Bear asked, but he regretted that as soon as the question left his stitched lips.

Silence answered him. Damn. That dragon was either ignoring him, or she’d hopped onto a light bridge and left. Good going there. You pissed off a potential lead. Bear shook his head. Sometimes, his acerbic nature got the best of him. Well, there was nothing he could do about that now.

Bear rolled over the side of the book and fell off it. Of course, he fell headfirst since that was the largest and most padded part of his stuffed body. But he was a ghost, so it didn’t hurt. His borrowed body flopped onto all fours, in an undignified sprawl but at least he was on the ground. Now, he just had to figure out how to move his ungainly body.

Maybe if I shove my paws into the cracks in the asphalt, I can pull myself forward. Well, it was worth a try. He had a little boy to find. Ran must miss me by now.

Bear belly crawled past a row of cars on one side and a brick building with a strip of grass in front of it on the other. Where are you, Ran? And where the heck am I? This isn’t where I expected to end up. Where even am I? Bear couldn’t lift his head to look at his surroundings because he had no neck. Someone thought stuffed bears didn’t need necks. I will kill whoever sewed this stuffed excuse for a body together.

“Aren’t you forgetting something?” that dragon asked. Oh, so now she wanted to talk when he was busy searching.

“What am I forgetting?” Bear crawled in a circle until he was facing the giant book again, and he regretted it when a blue object struck him in the face. Ouch.

“You forgot your book.” That smug dragon snickered, and the pages of the giant book rustled.

A normal-sized copy of the same book, which was about one-twelfth the size of the giant one, lay open next to Bear, and a soft purple glow shone from its pages. Was it creating another portal?

“You shouldn’t leave that lying around. Books are powerful. In the wrong hands, they can do a lot of damage.” The dragon winked a blue glowing eye at him from in between the pages, then receded into the giant book.

‘That’s the most profound thing you’ve ever said.” Bear would have shaken his head, but he needed a neck for that. Unfortunately, that dragon was right.

Bear reached for the normal-sized book, not the giant one, and it closed. I can’t leave this thing lying around, but how can I carry it? I don’t have fingers.

Find out what happens next, get your copy of Rogue Spells now! We’ll be back on Monday with more. 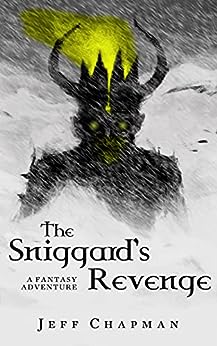