I’m writing to you from the past because a tropical storm is forecasted to pass though with high winds and heavy rain, but I still need to pop into your inbox. So here I am, your favorite fictional character.

(It’s me, Ran, Sarn’s son from the Curse Breaker series continuing to monopolize this email in case you were wondering, and no, I’m not the problem. Robin is, but I’ll get to that in a bit.)

Our last email was kind of heavy and dark, and we’re sorry for that, but today’s won’t be. The Scribe is okay. She cooked some comfort food and talked about her struggles and shock at what happened in a vlog thingamajig I posted for her on our YouTube channel. Listen to it here.

Since her mom is Italian, many tomatoes bravely jumped into the pot and became a delicious sauce. Of course, I’ve sampled everything. I must make sure all the food was edible. You never know with the Scribe… Sometimes she gets distracted by story stuff and forgets things in the oven. Only one garlic bulb turned out too burned to eat. Everything else was delicious and just what a growing character needs.

Well, almost what I need. I would have loved a few less veggie dishes and some kind of bread, but the Scribe treats her health like a game she wants to win. And I digressed again.

I know. It’s weird that we released the third set a few days ago, and we’re only now getting around to a sale. But we didn’t know when Curse Breaker Revealed would come down from Kindle Vella last week. We thought it would be this week, so we planned the sale and set it up for today.

Sometimes I wish Melinda’s sister had asked our Scribe to market our books, not just write and publish them. Since she didn’t, it’s up to us, characters, to do it. How else will we meet new readers?

You might have heard about a popular piracy site getting taken down. It’s a hot topic on Booktok, the bookish side of TikTok, but we never checked to see if our books were on there. Since we don’t know if that affected us, we’re not going to talk about it. There are enough authors already doing that, so our newsletters will be free of that.

We hope all creators are compensated for their work.

In other news, the Scribe recorded chapter 16 from Curse Breaker Enchanted, but during the last third, her apartment took revenge and the sound gets a little weird. At least Melinda thinks so. But it might be all in her head because I don’t hear any difference between the first part and the end. Then again, she’s a perfectionist, I’m not.

But she was still in the same place with everything set up the same way as as the first 2/3 of the recording. So if there is a difference, can I blame ghosts? Halloween just passed, and there was a big orange moon for several nights this week, so maybe that’s making the Scribe hear things?

But I digress again. I do that a lot. Listen to chapter 16 here.

As for Robin, well, she’s mad because the Scribe didn’t write much last week. I expect her to get revenge for that this week. I’m popping some popcorn right now with adult supervision, of course, and I’ll test out the Scribe’s new computer chair while I watch the drama unfold. I promise to take notes for next week’s newsletter.

I hope you have a great week, and I hope when I’m back in your inbox next week, the storm will have blown over, and we can get back to our regularly scheduled shenanigans.

Don’t forget about our sale on Curse Breaker Books 1-3. It’s 99 cents this week. The sequels, Curse Breaker Books 4-6 and Curse Breaker Books 7-9 are not 99 cents. They are 9.99, which is less than if you bought each book on its own. We can’t price them lower because of the high delivery fees a certain store front charges us for every book. (I’m looking at you, Amazon.)

We don’t make much money off these sets, but we do them for you, so there’s always an affordable option to adventure with us.

And that’s it for this week. Stay safe! We’ll back with more next week.

–This is Ran, Sarn’s son and sidekick, writing on behalf of my Scribe, Melinda Kucsera, signing off 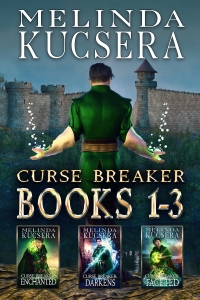