(Continues where The Perfect Stone left off)

Sarn spat blood, ignored the bright motes floating
in the red stain, as he rose for round four.
“Come on, stop defending. Start offending,”
said his teacher for this match, a man four
decades past caring and two past Sarn’s age.
“Come on, Kid, hit me. No more defense try
some offense now. I could hit at your age.”
In a glance, Sarn saw the practice stave by
the wall; he’d lost it in the last exchange.
A flurry of blows kept him moving back,
dodging, blocking but allowing no change
to tactics criticized in this attack.
A halt called, a welcome rest, a head shake
signaled he’d not measured up, no mistake. 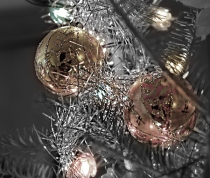 Sarn splashed water from a fountain to clean
his face then stared at the reflected glow
of his green eyes on that watery screen.
He turned his back on that scene but that glow
preceded him down the dark corridor.
Opening the door, he stopped, saw a tree,
his four year old son on a stool, a drawer
of metal balls resting ‘tween his feet. Three
seconds from a fall if he didn’t hurry.
Ran turned, his hand upraised to hang the ball,
his mouth open to explain. Sarn’s worry
never came to pass; his son hung the ball,
explained the tree and all as holiday
requirements for this thing, ‘Christmas Day’.

This ‘Christmas’ required explanation.
It was a name he’d heard over the years.
His orphan upbringing, his abduction
into slavery in his preteen years
and then indenture at sixteen had left
a Christmas-sized hole in his life until now.
But he didn’t ask, he watched Inari’s deft
hands drape a silver fringe over the boughs
as she rounded the tree, proving his son
had some supervision. Was Advent part
of the thing since it preceded this one
day called ‘Christmas’, a day that requires
a tree, a wreath and prayers that inspire?

The story continues in Second Thoughts.

Advent offering #4. Follow Sarn’s Advent journey. You can view the rest of Advent sequence starring the cast of the Curse Breaker Saga on my Holiday page.

All photos are mine and they were manipulated to look vintage using the following process:

I used Photoshop because I worked as a retoucher for several years and Photoshop is my best buddy. Pixlr, an online photo editing program (it’s free to use) offers everything I mentioned above. Instead of black and white adjustment layer, use desaturate but first, copy the original layer. You’ll see why later.

Desaturate doesn’t have any sliders to adjust how the image is gray scaled but neither did photoshop for a long time. So to get around that limitation, play with the following adjustment layers: vibrance, saturation and  curves and then make sure to flatten those layers and a copy of your background and then apply desaturate. (Why? because desaturate changes the pixels of your layer instead of creating a separate adjustment layer like its buddies do.) Keep playing until you like the results. Always keep one copy of your base layer clean so you have a reference point.

Pixlr also has the ability to add layers, mask them and it has my best bud, the unsharp mask, with its three sliders. So the app gets my vote for best photoshop alternative.

Prompt inspired by Prompt Stomp #10: Vintage, the Christmas season and the cast of the Curse Breaker Saga, who’ve decided to throw their own brand of holiday cheer into the mix. They’ve never met a prompt that they couldn’t squeeze in a little mayhem.