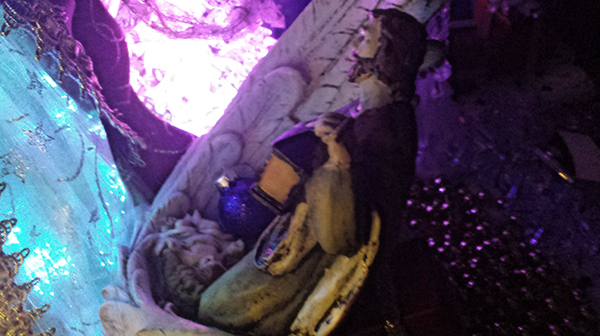 The Holy and the Lowly

(Picks up where Sons and Holy Ones left off)

After their talk, Sarn had a better grasp
of things; Ran was safe inside the stable.
So he walked and wondered until a rasp
drew his eye to the Savior’s slim, sable
bearded step-father; out of wedlock’s born
a Holy Infant, a bastard like Sarn’s son
and Sarn himself and that made Sarn less torn
up about his family and his son.
The Holy Family was as broken
as his own but united by love’s bonds.
That was what mattered; all else were tokens
of public goodwill without love to bond.
Love he had in abundance for his son;
Perhaps his family wasn’t broken or done.

“As long as there is love, there’s family,”
the King’s step-father said, “belief takes time,
you’ve seen and heard much that’s not readily
digestible without a struggle o’er time.
That’s what belief is–a lifelong struggle,
that changes as you age, but ne’er ceases.
This is but an introduction, struggle
with its meaning ’till you at last find peace
with our Father who art in heaven, where
all struggle ends, all answers are given.
Encounter him when ready, He’ll be there
with spiritual gifts to be given.”
Said the step-father of the Lord of Lords.
Sarn believed; that’s understanding’s reward.

“Sarn, come help me cradle the Child Divine,
God rewards you and all that’s thine, in par-
adise,” so prays the Blessed Mother, divine.
He came among us at Christmas time, stars
shall bring men from far off, love’s diadem.
“He comes, loves and saves and frees us,” Ran sang.
The Blessed Mother put love’s diadem
in Sarn’s arms; he cradled the Child Divine,
God’s own light shined on them, in paradise
as prayed the Blessed Mother, whose Divine
Son smiled up at Sarn and paradise
lost its grandeur as a gaze lock took hold–
Scenes shot in a burst of a death foretold.

Sarn saw a cross, a savior hung there dying;
he saw a thirtyish man preaching love,
peace and prayer to crowds that’re growing, vying
for his time, healing miracles and love.
He saw many things he didn’t understand;
An invitation had been extended;
He wasn’t ready to accept; it would stand
until he was, forever extended
with love; that was the last he saw as light
swallowed him and he folded, falling
free like a feather to land, son in sight,
on his bed back in Nolo’s suite; falling
night drew a blanket of stars ‘cross the sky
as he and his son slept ’till morning’s nigh.

The story continues in Little Christmas.

Part of Stars and Angels Sing: A Curse Breaker Novella

The song referenced above is Christ was Born on This Day which uses lyrics from a much older hymn. 🙂

(and there are circles…)

18 thoughts on “The Holy and Lowly”