We’re praying for the people of Ukraine and hope the war will end soon with their sovereignty intact.

Like us, you may be wondering what you can do to help. We’ve put together a post of what we’ve found so far, and we’ll update it as we find more ways to help.

Now, that we have that off our chests, we return to our regularly scheduled shenanigans.

What new trouble have we gotten into this week?

Before we get into that, the Scribe finished the AI-narrated audiobooks for:

And they’re on sale now on Google Play.

Back to our troubles. Would you believe we behaved?

Well, we tried to stay out of trouble. But sometimes trouble finds us, and we got ourselves into quite a muddle this week. We need your help to get out of it.

We’ve heard other authors have a downloadable graphic that illustrates the reading order for their books, and we want to make one for ours!

This resource will be for you, our dearest reader, and it’ll be free on our site when it’s finished. And we’ll release updated versions when new books come out in all our series.

But aside from our book covers, what do we put on it?

And what order do we put our books/series in?

The Scribe was thinking of arranging our books in publication order, but is that the best way to navigate our world as more books come out in all our series?

Unfortunately, we lived each book in publication order, so it’s hard for us to imagine reading it any other way.

But some series started out as prequels or sequels, and they may not stay that way as more books come out, which complicates this project.

And maybe you read our books in a different order and enjoyed it?

If so, please hit reply and tell us! We’d love to know what you think of this idea and what you’d want on this graphic because your favorite characters are feeling a bit clueless.

(Should this graphic be printable?)

And yes, fictional characters do sit around talking about books. We also argue about whose books are the best, and whose books/series the Scribe should work on next. That argument is particularly fierce right now (put down that sword, Robin), and some characters are more vocal than others.

You know who talks the loudest. This is Ran, Sarn’s son, as usual, and soon I will have some behind-the-scenes stuff from Curse Breaker Trapped. But I promised no spoilers until Fallout has been out for at least a month, so I’ll say no more about that yet. But that date is rapidly approaching, so if you haven’t read Curse Breaker Fallout yet, please do it soon!

And don’t forget to hit reply and tell us what you’d like on this reading order graphic because we want to know!

I now return you to our special presentation of:

“You can’t go there.” Thing waggled a furry finger at him.

The conversation must have continued while he’d been woolgathering. What were they talking about now? “Go where?” Sarn rested his chin on his fist.

“The Gray Between. Weren’t you listening? No, of course, you weren’t. Your mind is all over the place.” Thing threw his hands in the air.

“Would you stop reading my mind?” Sarn glared at that damned owl.

“I’m not reading it. I can see the patterns your thoughts make, and they’re scattered about like a school of fish swimming away from each other.” Thing raised a tufted brow and challenged him to refute that.

But Sarn couldn’t because that damned trickster was right. “You can see thoughts? How’s that even possible?”

Thing drew himself up to his full height and puffed out his chest again. It must be a bird thing. “I’m a mind mage. There’s not much I can’t do when it comes to people’s minds. You might want to remember that.” Thing folded his wings.

He must have flown down to the ground because that owl was only a few feet away. Sarn hadn’t been paying attention for a few minutes there.

“Oh, will you please stop? He knew you were wool-gathering because you had that glazed look people get when they’re not paying attention. Don’t let him fool you. He doesn’t dig around in other people’s minds unless he needs to.” Amal glared at her mate, but if she thought she’d get a confession out of him or an apology, she had another thing coming; no pun intended.

Thing took her statement as a challenge. “Not true.”

“My mind doesn’t count. I’m your mate. If I didn’t want you in my head, I’d throw you out.” Amal raised her tufted brow and upped the challenge.

This time Furball clapped. He enjoyed watching his grandparents debate.

“I wasn’t talking about your mind.” Thing backed down.

Sarn had never thought he’d ever see that. Thing was so confident. How much of his attitude was bravado, and how much was real? Maybe he didn’t want to know.

Amal hopped off her perch and sailed down to the ground, so she was face to face with her mate. “Well, you weren’t talking about your kids’ minds. They know how to keep you out, and you wouldn’t rifle around in their heads without an invitation or a damned good reason anyway. Stop pretending you’re some villain who doesn’t care about mental privacy. You’re not fooling anyone.”

“She’s got you there,” Miren said as his lips twitched. When Amal turned and bowed, his brother gave in and smiled.

Sarn would probably laugh about this later, but right now, he had a more important problem in need of a solution. “Can we please get back to the topic at hand? J.C. says our sister needs help, and I need to help her, so how do I do that?”

“Well, you don’t do it by going to the Gray Between. And I’ll tell you why since you’ve all forgotten the rules.” Thing stepped right back into lecture mode. He’d probably make a great teacher if he wasn’t so prickly all the time.

“What rules?” Amal scratched her head.

“Everyone should know the rules of the Gray Between. It’s the place you go after you die.” Thing waited until Amal snapped her fingers, but they didn’t make a sound because her fingers were furry. It was weird when the OwlCats made human gestures, but they’d probably learned them from Nulthir.

“Right, I forgot about that. You can only go to the Gray Between three times, and on the third time you don’t always come back.” Amal shivered.

“Then how do we help her?” Sarn sat up. This was taking too long. Sovvan had said time flowed differently in the Gray Between, but he couldn’t remember if time moved more quickly or more slowly there. He hoped it was the former because that would give them more time.

“You do it through here.” Thing tapped the side of his head.

“I don’t understand. Doesn’t that count as going to the Gray Between?” Sarn ran a hand through his hair just to feel something solid. This conversation had taken a strange turn.

To read what happens next, get Curse Breaker Fallout now! And if you want to know what Sovvan is doing, grab His Angelic Keeper Tempted. 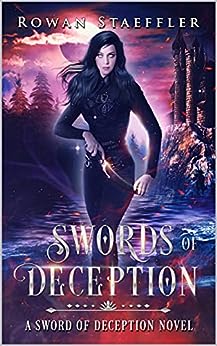