Last week, we traveled through a portal to my world. (This is Ran, Sarn’s son in case you forgot.) When we reached my world, we went looking for the culprits who are holding up the release of Relic Hunter. 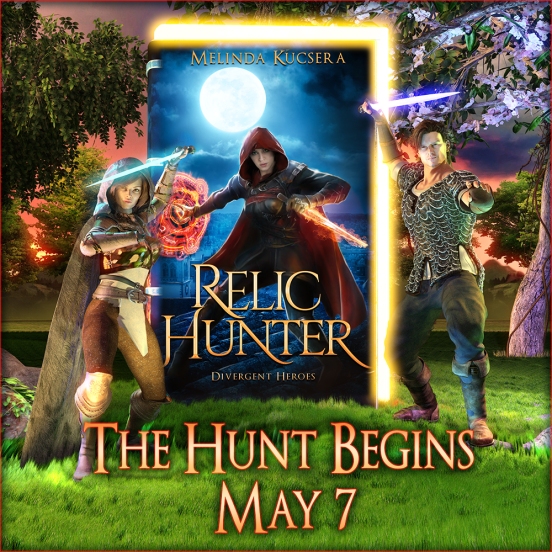 So basically, those two people in the image above. So let’s return to that.

“So would you say it’s Papa’s fault that the story is not finished yet, and it’s publication had to be pushed to May 7? These nice people would like to know.” I gestured to you, and you smiled expectantly because such smiles aways invite answers.

Yan stroked his stubble-covered chin. “No, he’s been really good about moving the plot along.”

Yan was a head taller than Zoya and nonchalantly leaning against a tree to take some of the weight of his prosthetic leg. It was hidden under his dark pants and boots, but I knew his artificial leg was there. I could sense it.

His answer made sense. I was pretty sure it wasn’t Young Papa’s fault the story was held up. Trouble tends to follow him around like a lost puppy. His magic must attract it. But I still had to find out who the troublemaker was.

“You’d have to ask our scribe that.” Now, it was Zoya’s turn to smile, and it was pure mischief. She cocked her head and cupped her ear with her hand as if listening to something. “In fact, I hear her calling now. You’d better hurry back to that portal.”

“Maybe she’s working on our story right now and noticed you’ve popped into it with an entourage.” Yan shrugged as if this was of no consequence to him.

“Now if you’ll excuse us, we’ve got some relics to find.”

“And contain. Don’t forget about that part. Finding them is only the beginning,” Zoya added. “Oh and would you look at that? My relic-finder just lit up. It must sense another relic nearby.”

“Where? I don’t see any relics or any relic-finders.” I looked around but all I saw were really big enchanted trees, and the two knights talking to me.

“It’s in here where it belongs. I don’t have to see it to know its all lit up.” Zoya tapped a pouch on her utility belt but didn’t remove said relic-finder.

I doubted it was even in there. This wasn’t the first time an adult had tried to send me away before events took a dangerous turn. Papa tries that in every Curse Breaker book, but he rarely ever succeeds. That’s why he’s so good at casting magical shields.

But these two weren’t mages, so maybe I should hightail it to a safer place. That would probably make Papa feel better about this whole outing when he eventually finds out. But first I had a couple more questions.

“Um, just for the record, what is a relic-finder? Aside from the obvious, I mean.”

Zoya held up a knobby stone that definitely wasn’t glowing. I live with a mage, so I know what a glowing rock looks like. I can also recognize the types of rocks that can light up, and this one wasn’t one of them. I had a feeling that relic-finder—if that’s what she held up—is itself a relic of another time and place.

Let’s just keep that a secret between us, okay? I’m not sure Zoya or her cousin would like to hear that particular theory. They’re awfully touchy about relics and the things that locate them.

“Now, you’d better run along. Melinda’s looking for you.” Yan gestured toward the purple glow of the portal we used to get here.

Since he might be right about that, I nodded and turned to go. It wouldn’t do for my scribe to find me here. She might send me back to my book where I belong. Actually, that would be kind of cool because I appear in 7 books so far.

I wonder which one she’ll send me back to. I’m hoping for one she hasn’t finished yet so I can beg for more page time. 😉 You know me, I’m always angling for more of that. So naturally, I turned back. I had one more unanswered question.

“What is it now?” Zoya gave me a pained look.

As a traveling knight, she probably didn’t spend much time around kids, so I gave her a pass on that one.

“If Young Papa’s not holding up the story, then who is? Is it you? Your cousin? Or someone else?”

“Maybe it’s me,” said a dark-skinned woman in leathers as black as her eyes. “Or maybe it’s him.”

Zenobi flicked a hand at a man wearing—I kid you not—a helmet made of chains and diamonds. It looked like a diamond tiara had exploded on his head then shrank to fit his scalp precisely. I just goggled at it. As gewgaws went, that one was pretty ostentatious, and it glowed faintly green.

“Or them.” Zenobi waved at two shirtless men with lots of muscles under their curly chest hair. Each man wore a rainbow of thin bracelets made of semi-precious gems. The guy on the left was a little younger and didn’t possess a full rainbow on his arms. That probably meant something important.

“Or—” Zenobi started to say when Zoya cut her off.

“Enough already, they get the idea. This hold-up is a team effort.”

“I’m not holding it up,” Young Papa said as he and a very young Uncle Miren stepped into view.

I was relieved to see that his green eyes glowed even back then. That boded well for me. I want the glowing eyes and the magic that argues with you. But I didn’t have it yet, just a small gift that came in handy in Curse Breaker: Sundered.

Young Papa was, well, I don’t know how old he is in Relic Hunter. Certainly, a lot younger than he is the Curse Breaker books where he’s raising me one adventure at a time. But definitely younger than his brother is in those books.

But it was time for me to skedaddle before I made an impression on him. I didn’t want him to remember this conversation in his future, which is my present, since this outing is a secret and all.

Well, none of those characters look very contrite. But Relic Hunter‘s a fun story. It will publish on May 7.

That gives our scribe a few more days to chase the cast down and make them end it. It’s already 80,000 words, which is more than double the 27,000 words of the original version which appeared in A Different Kind of Hero last year. And there’s still more story left to tell.

Tune in next week for your first look at Relic Hunter.
This is your beloved newsletter host, Ran, son of Sarn signing off.