Normally, I’d regale you with my shenanigans this past week, but my Scribe received some bad news, and we’re still reeling from that.

Melinda’s aunt passed away suddenly. No one knows what happened. She will attend the service today with her mother, brother, and reshuffle her work schedule this week.

And that has me a little concerned. Any time her work schedule changes, it affects our books. We’ll see how that goes.

I apologize for the typos in last week’s newsletter. They are mine, not my Scribe’s. (This is Ran, the son from the Curse Breaker books.) I got chewed out for them, and now I must show all the emails to Melinda before sending them. No more hiding my emails to you and writing them in secret.

I’m okay with this since my book got some page time this week, and you know how much I love that. I wasn’t in the scene Melinda wrote, but that’s okay because the sequel to Curse Breaker Revealed just passed the 81,000 word mark.

At this point, it’s closer to done than Melinda’s official WIP, Rogue Ranger. Since my Scribe is still reeling from the sudden passing of her aunt, I won’t put forth my case to finish the next Curse Breaker book first until she’s in a better head space.

Aren’t I a nice character?

(I’m also afraid of Robin’s reaction should Melinda give in to my demands. Papa will protect me, but I’d rather he didn’t have to since he doesn’t know there are a lot of books about him.)

Rogue Ranger clocks in at 32,000 words if you were wondering. But it has a cover, so it has a leg up on the competition.

In other book news, Curse Breaker Revealed is still with the editor. We were supposed to receive it last week, but that didn’t happen because our editor was sick. So you have time to read Curse Breaker Trapped and enjoy my two adventures and the evolution of my magic. Since we didn’t receive the edits back yet, we still don’t know when Revealed will publish. Hopefully next week, we’ll have some more information.

Melinda is working on the audiobooks for Hunter’s Night and Rogue Night as well. They will be AI-narrated for now, like the Curse Breaker books, so listeners who don’t mind AI voices can enjoy those stories too. Robin is still debating which voice to use in the final version, so hopefully, I’ll have more news about that next week too.

I want to leave you with a preview of Curse Breaker Revealed, but Curse Breaker Trapped has only been out for a month, and the first chapter of Revealed will spoil the end of Trapped. There’s no way around that.

I know money is tight. Did you know you can request your local library to get a copy of any of our books in ebook and paperback format?

All our books, including the omnibuses/boxed sets, are available in Overdrive, Hoopla, Borrowbox, and other systems that serve libraries, so you don’t need to miss a moment of the magical mayhem.

That’s why we left Kindle Unlimited at the end of last year. We wanted to be more accessible, so you can read us through your local library and find us in other stores too.

That’s it for now. I need to cheer up my Scribe and make sure she gets to the service on time. Have a great week and take a moment to hug your loved ones.

– This is Ran, son of Sarn from the Curse Breaker series, signing off. 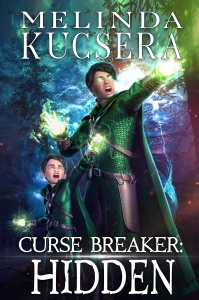